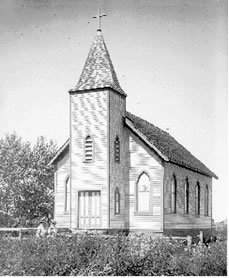 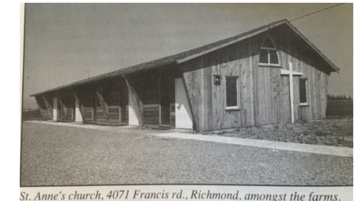 St Anne's has been a part of the landscape of the Richmond-Steveston area for over a century. It came into being in 1890 as one of a number of congregations (Methodist, Baptist and Anglican) that held services in the Steveston Opera house built by the Steves family.

The Reverend Joseph McAfee Donaldson was the founder and first rector of St Anne's. In 1891 St Anne's Church was erected at the northwest corner of 5 th Avenue and Richmond Street on the foundation of an incomplete Baptist church that Reverend Donaldson had purchased when the original owner was unable to obtain sufficient financing to complete the construction. The church was formally dedicated by Bishop Sillitoe on January 3, 1892 . The bishop had traveled from the diocesan headquarters in New Westminster on a journey that today might take a half hour by car, but at that time involved a day's travel by boat, horse and carriage. During winter months, the church building having no insulation was too cold for worship and so services were held at the Donaldson residence.

Little in the way of written records is available to document early days at St Anne's, but excerpts from a few letters from Reverend Donaldson shed some light on conditions at the time:

The position and conditioning of this place are somewhat peculiar. It is the centre of a farming district, and also of the great salmon canning industry. The settled population is about 400, but in the fishing season it amounts to from 6,000 to 7,000 of all nationalities……

I have succeeded in building THE SHELL of a very nice commodious church ….Being a wooden building and only a shell….we have to close it for the winter months…To finish the building will cost about 100 pounds but half that amount would make it sufficiently comfortable to be used during the winter season. Can you help us in this important and needful work?

Apparently, this plea resulted in a donation of 30 pounds from the St Anne's Society of Kemerton, England . Money was so tight that Reverend Donaldson had to make due with “common vessels” for his Communion Service. In 1900 the parish received the gift of a chalice and paten and a second chalice was donated in 1902. These items are still in the church today.

Reverend Donaldson resigned as Rector of St Anne's due to ill health in 1914 at the age of 80. A series of rectors followed over the next several decades, none of whom lasted more than 5 years with the exception of Albert James Williams who arrived in 1930 and stayed 12 years. He served as Vicar of St Alban's and St Thomas'as well as St Anne's. However, from 1942 until 1957 none stayed longer than 4 years. In the autumn of 1957 Reverend John Patrick arrived as yet another interim. He stayed for 25 years.

By this time the original church was too small for the needs of the parish. It seated 50-60 persons. The building was a small white frame structure with a high peaked, shingled roof that leaked badly. The nave took up most of the interior with the chancel and sanctuary at the end. On one side was a small vestry. The lights hung by chains which swung to and fro in heavy winds and the wiring often broke. It was time to move.

In 1958 the current site was offered to the parish by a Mrs. Skinner the daughter of Mr. Francis after whom the street is named. The church was built near the corner of No. 1 Road and Francis Road and included memorial windows from the original church . The last service in the old church was held on Good Friday, March 27, 1959 . Following that service the parishioners moved to the new building bringing with them the pews, altar cross, organ and bell from the tower. The first service in the new St Anne's was held on Easter Sunday, 1959.

During his 25 year tenure at St Anne's John Patrick was well known for his work with youth from broken homes, juvenile court and the streets. He was much sought after as a public speaker and forum participant on matters related to welfare and family relations. He retired from the parish on December 31, 1982 .

In 1988, under the leadership of the Reverend Keith Gilbert, a major renovation was completed that doubled the size of the Church and placed the altar in the centre of the congregation effectively producing a “ church in the round”. A four column bell tower was erected and it features a locomotive bell donated by the CPR. Other features of the renovation included an enlarged industrial kitchen, a two story classroom area, new offices and a portico over the entrance. In 1991 the worship area was restructured with the altar moved to the east side of the building and the pews arranged in a semicircular pattern facing it. This configuration continues to the present.

St Anne's also celebrated its centennial in 1991. The parish had become debt free in 1990 and on January 14 enjoyed the ceremonial burning of the mortgage. Today we continue on our mission to be an open and welcoming congregation. With the continued dedication of clergy and lay volunteers, the future looks bright.

Most of the material in this article has been liberally excerpted from “Centennial History of St. Anne's Steveston, 1891-1991” by Patricia Knight, published by St Anne's Steveston Church.